Arduino Courses and Workshops in London 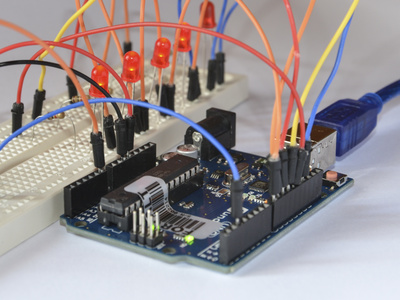 With Arduino students of all ages are learning to make things that light up, move and respond to the physical world around us.

But what exactly is Arduino?  Arduino is an open-source electronics platform, which is based on easy to use hardware and software.

In this course students will learn about both aspects of Arduino, the hardware and the software. They will be introduced to electronic components such as resistors, transistors and diodes and their properties in the circuit.  They also learn how to create circuits and to program them with C.

There is no prerequisite for this course.

What is Arduino and why is it so cool?

Arduino is an open source electronic platform, which integrates the use of hardware and software. In other words, it’s programmable hardware that you can manipulate to your will!

By the end of this section you should have a solid understanding on what Arduino is and how it can be used in our everyday lives.

Arduino in a Nutshell

If you look at a picture of Arduino, you’ll notice it looks like a mini motherboard. It’s a platform that receives inputs and sends outputs and uses very simple code to allow you to bend it to your will. It can control things like lights, read information, adjust variables and much more.

In fact, the only real limitation to this technology is how you use it. Later on we’ll talk about what other people have done using this technology, from quirky things to outright amazing, this technology has given the globe access to what only companies like Phillips or Sony used to be able to do.

The people from Make Magazine love Arduino, they have created several projects using this tech and with some amazing results. One idea that was particularly interesting was an adaptation to suit the ‘home movie viewers’ preferences.

If you love movies and like to create an atmosphere for watching your favorite shows, wouldn’t it be great to generate the right ambiance with the click of a single button?

Using the Arduino platform, you can program a censor to detect the “play” button on your DVR device, which in turn will send out a signal to a Power Switch Tail, which is a device that controls the power to your AC devices such as lights and so forth. In turn, when you press play on your remote, the Arduino controller will automatically switch off your lights.

You could also program it that every time you press ‘Stop’ another signal gets sent to turn the lights back on.

As you can see, while this is only the tip of the proverbial iceberg, the endless application of this technology applied with the right kind of creativity can transform your life in a radical way.

Some projects done by people

Here’s a few examples of projects that people have done with the Arduino system.

Secret Knock Gumball Machine – This candy dispenser won’t take your money but if you know the secret knock it will deliver a gumball. This was done using Arduino.

Kitty Twitty – Twitter is the second largest social sharing network in the world and now your cat can tweet too! This application of Arduino created a cat toy that every time your cat plays with the toy, sends a tweet for the world to see!

Mind Control Robots – When you think that’s not enough, some people integrated different technology and programmed electronic devices to respond to mental patterns using the Emotive Epoc, which the Arduino responds to.